“Global demand of industrial robots went off in 2014 and reached for the first time more than 200,000 units,” said Arturo Baroncelli, IFR President, on Monday in Chicago.  “Driver of the growth-was again the automotive industry followed by the electronics industry.”

New peak levels in all regions
Based on the preliminary results of the global statistics on industrial robots, the IFR estimates that about 225,000 units were sold in 2014, 27% more than in 2013. The main impulses came from Asia, particularly from China and South Korea. In total, about 140,000 units were sold in the whole region, by far the highest volume ever recorded. Robot sales to the Americas and to Europe also reached new peak levels.

Increase in all major markets – China and South Korea on top
Robot sales increased in all major markets. China was again by far the biggest destination of industrial robots in 2014. About 56,000 units were sold, 54% more than in 2013. Thereof, Chinese robot suppliers delivered 16,000 units and international robot suppliers about 40,000 units. Due to considerable investments of the automotive industry South Korea was the second largest destination with about 39,000 units. It was followed by Japan, the United States and Germany. The five largest robot markets represent 75% of the total sales in 2014.

About 21,000 service robots for professional use were sold worldwide in 2013, 4% more than in 2012, reports the IFR Statistical Department in the new study “World Robotics 2014 – Service Robots”, which was published on Tuesday in Frankfurt. The total sales value slightly decreased to US$ 3.6 billion. For the period of 2014 to 2017, sales forecast which were provided by companies worldwide indicate an increase to about 134,500 units with an estimated value of US$ 18.9 billion.

Continued strong increase of personal and domestic robots
About four million service robots for personal and domestic use were sold in 2013, 28% more than in 2012. The sales volume was about US$ 1.7 billion. It is estimated that about 31 million units of service robots for personal use will be sold between 2014 and 2017 thus indicating the continued strong growth of service robotics in this field. “Robotics in personal and domestic applications has experienced strong global growth with relatively few mass-market products categories: floor cleaning robots, robo-mowers and robots for edutainment. Future product visions point to domestic robots of higher sophistication, capability and value, such as assistive robots for supporting the elderly, for helping out with household chores and for entertainment,” stated Martin Hägele of Fraunhofer IPA, the author of the study.

Considerable growth of logistic systems
About 1,900 logistic systems were installed in 2013, 37% more than in 2012, accounting for 9% of the total sales of professional service robots. Thereof, about 1,300 automated guided vehicles in manufacturing environments are building up an increase of almost 70% compared to automated guided vehicles sales numbers in 2012. Despite the improvement of the data base, it is assumed that the actual number of newly deployed systems is far higher.

It is expected that the market of automated guided vehicles (AGV) in manufacturing environments increases significantly over the next years as important preconditions for the investment into AGVs will be increasingly met such as:

Automation of farming and livestock breeding is increasing
Almost 5,100 milking robots were sold in 2013 compared to 4,750 units in 2012, representing a 6% increase. Up to and including 2013 it is expected that about 40,000 milking robots are now in use. Certainly, milking robots can be considered a success in applying robotic solutions outside of the manufacturing scenario. In addition to the robots themselves, manufacturers offer customizable packages for milk storage and farm management. 760 units of other robots for livestock farming such as mobile barn cleaners or robotic fencers for automated grazing control were sold in 2013, resulting in an increase of 46%. Agricultural robots, e.g. automation of crop farming, are getting grounded in the market also. The total number of field robots sold in 2013 was about 5,900 units, accounting for a share of 28% of the total unit supply of professional service robots. The sales value of field robots increased by 4% to US$ 883 million, accounting for about 25% of the total value of professional service robot sales. It is estimated that almost 34,000 field robots will be sold in the period between 2014 and 2017, thereof, 28,200 milking robots.

Demand for defence robots and medical robots declined in 2013
With about 9,500 units, service robots in defence applications accounted for almost 45% of the total number of service robots for professional use sold in 2013. Thereof, unmanned aerial vehicles seem to be the most important application but their sales decreased by 12% to 8,500 units. A number of 750 unmanned ground based vehicles which include e.g. bomb fighting robots were sold, 80% more than in 2012. About 54,000 robots for defence applications will be sold in the period 2014-2017.

It should be stressed that the service robotics statistics offer a conservative estimate as only sales numbers which are reported by companies or retrieved directly from companies are considered. 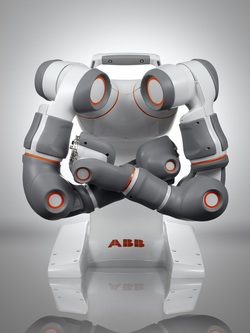 ABB has unveiled the world’s first truly collaborative robot:YuMi®. YuMi is a human-friendly dual arm robot designed for a new era of automation,for example in small parts assembly,where people and robots work hand-in-hand on the same tasks. YuMi is short for ‘you and me,’working together.
YuMi has been developed to meet the flexible and agile production needs of the consumer electronics industry in the first instance. It will increasingly be rolled out to cover other market sectors. YuMi is a collaborative, dual arm assembly solution with the ability to feel and see. The robot’s soft, padded dual arms,combined with innovative force-sensing technology ensure the safety of YuMi’s human co-workers. Safety is built into the functionality of the robot itself so that it can work cage-free.
Capable of handling everything from the delicate and precise parts of a mechanical wristwatch to the components used in mobile phones,tablets and desktop PCs, YuMi performs with accuracy so great it can thread a needle.
“YuMi is going to change many of mankind’s assumptions about manufacturing and industrial processes,” said Pekka Tiitinen, head of the Discrete Automation and Motion division, “Yumi will open endless possibilities. We are at the start of a very exciting new era for industrial automation.”
Per Vegard Nerseth, head of ABB’s global Robotics business, added: “Naming this robot YuMi reflects the true spirit of human -machine collaboration–humans and robots sharing tasks side by side in ways we could never have imagined previously.” 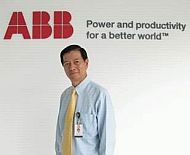 he International Federation of Robotics states that demand for industrial robots will continue at an average annual growth rate of 12 per cent between 2015 and 2017. In Asia/Australia, robot sales are expected to increase by around an average of 16 per cent per year. The automotive and electronics industries will continue to see increasing investment in robots.

Mr. Lim Say Leong, Assistant Vice President, Marketing of ABB, thinks that in a new era of robotics, collaboration between humans and robots will become a reality.

Robotics made simple
Small parts assembly is leading the charge in human-robot collaboration, where humans and machines are starting to work right next to each other, with no need for cages and other protective equipment or barriers. Automation will become simpler and more user-friendly, such as modular plug-and-produce components that will enable people without extensive experience in robotics to program and integrate a robot in the process. At ABB we believe very strongly in a “what you see is what you get” (WYSIWYG) programming interface, so it is possible – perhaps even expected – that visual apps as well as programming by teaching (rather than coding) will greatly enhance the ease of programming for the next generation.

The tools that allow robots to interact with the world around them are also in development, such as advanced sensing and advanced gripping. In order to allow robots to do all the jobs that they are well suited for, they will need to develop more “human-like” abilities to find, identify and manipulate objects. When combined with powerful processing capability, tools like force control and advanced 2D and 3D vision systems will create a kind of robotic “independence” and allow the robot to make “decisions” about what to do when it encounters the inevitable hiccups that arise in everyday operation. Already ABB has developed a new generation of Integrated Force Control and Integrated Vision to help make these advanced technologies available to more and more end-users.

The benefits for Asian manufacturers
Industries must act now to prepare themselves in integrated automation for when the economy recovers; where further automation will lead to a less labour intensive and more productive future, with less resources and time used to produce more goods at a high and consistent quality. For manufacturers, robots not only bring productivity, but also huge reductions in energy consumption and carbon dioxide emissions. Automation lines equipped with vision systems can also operate without the need for ambient factory lighting or air-conditioning (subject to the requirements of the manufactured product itself), allowing for the possibility of 24/7 operation with substantial energy savings.

Companies with a well-established manufacturing base can also leverage on systems that can collaborate and determine solutions that minimize the cost to the business. In Asia, companies manufacture items ranging from one-off design to large volume production of the same design. These pose great challenges for robots to be innovative, and yet robots can be productive to meet the desired return on investment.

Opportunities in Southeast Asia
The growing middle class in Southeast Asia and higher levels of education are producing new generations of youth who receive less job satisfaction with dirty, dangerous and dull tasks that are characteristic of some manufacturing processes. This creates a demand for more engaging and meaningful jobs in the market, which could pose a challenge to manufacturers in the region who will need to revamp their organization of human resources. In fact, some small medium enterprises have started employing robotic automation as a means to retain talent and even attract their next generation to inherit the business.

Faced with an uncertain economic outlook, lower oil prices and increased market volatility, businesses have to rethink ways to add value to their products and services. Cheaper Asian countries have the competitive advantage of high volume and low cost in their production chain; players that will stand out are those who provide customization and cater to the individual needs of customers. For example, product cycles in the electronics industry are getting shorter, with new models and functions being introduced at a blistering pace. Fast deployment and incredible flexibility are key to meeting the demands of low volume but high mix products. In this regard, manufacturers can be flexible in switching between different products and processes with robots, rather than needing large scale production with high product volume. By offering higher quality products coupled with fresh varieties, companies can bring a difference to the table and disrupt the market.

The SDA10D is a dual-arm, 15-axis robot with incredible dexterity, freedom of movement in a compact footprint. Both arms can work together dramatically simplifying end-of-arm tooling. Designed with patented servo actuators, all cables are routed through the arms.

Online chat with us