Foreign investment capital (FDI) is the driving force to help Binh Duong become a modern and dynamic industrialized province. In the coming time, the province will prioritize attracting capital from developed countries, the world’s leading potential partners with modern management skills into high-tech, environmentally friendly, less labor intensive industries. In particular, the province is calling to attract investment in the Science – Technology Industrial Park (Science and Technology) with the vision of becoming the innovation center of the economic region. key economy south.

The province’s policy of redirecting industrial development to the north with industrial zones as leverage has been effective, helping localities develop industry very quickly. With Bau Bang district, thanks to this policy, in recent years, the district has been invested to upgrade a strong urban infrastructure system with many completed ring road and radial axis projects, making Bau Bang a the northern industrial center of the province.

According to Mr. Vo Thanh Giau, Chairman of the People’s Committee of Bau Bang district, with a convenient location, wide and open ground, and preferential policies and mechanisms, the district’s industrial zones have been creating a strong attraction for tourists. the investors. As a result, the district’s appearance has grown stronger. Along with that, the Science and Technology Industrial Park project is opening up great development opportunities for the locality. The district’s economy has prospered and rapidly transformed in the direction of industry and services. Currently, the district continues to build and develop infrastructure, create impetus for industry development, attract effective investment projects, in the period 2021-2025, the district will continue to mobilize all resources invest in building a synchronous and modern infrastructure system in association with industrial – service – urban development. 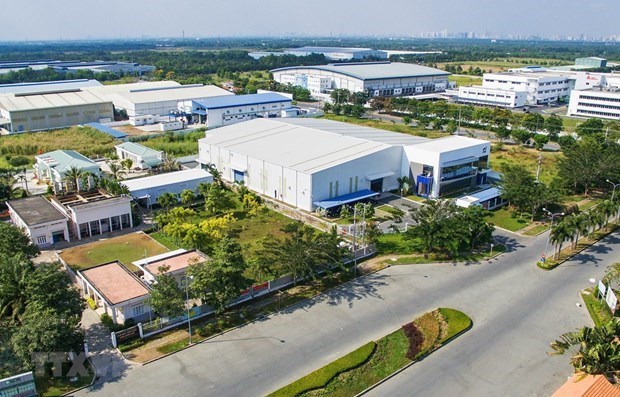 Mr. Bui Minh Tri, Head of Management Board of Provincial Industrial Parks, said that located in the Southern Key Economic Zone, Binh Duong is becoming one of the leading localities in attracting investment in industrial zones. However, in order to continue to maintain its attractiveness to investors, in the coming time, the province will also develop many preferential mechanisms and policies to support investment in industrial zones. In particular, the province’s orientation is to attract high-tech science and technology professions, bringing high surplus value. The Science and Technology Industrial Park that the province plans to develop in the “smart city” project is also in the set direction. In 2021, despite facing many difficulties due to the Covid-19 pandemic, but with many positive and effective solutions in accompanying the province’s businesses, businesses in the province’s industrial zones still maintain the production rhythm, business, create added value of products, continue to contribute to the economic growth of the province.

The Science and Technology Industrial Park project actively developed by Becamex IDC is one of the key projects of the Binh Duong Smart City Project, with close cooperation between Binh Duong and the World Association of Science Cities (WTA). , learning models from TP.Daejeon, Korea, Eindhoven Netherlands, Singapore and many other scientific cities in the world. The Science and Technology Industrial Park was built to attract corporations and both small and medium enterprises, start-ups in key manufacturing industries with high added value, suitable for the current period.

According to Mr. Nguyen Van Hung, Chairman of the Board of Directors of Becamex IDC, grasping and quickly adapting to the continuous development of science and technology, and at the same time to establish a solid foundation for the sustainable development of Binh Duong, the Science and Technology Industrial Park will provides a comprehensive ecosystem for technology- and knowledge-intensive activities. The Science and Technology Industrial Park is the focus of development of the Innovation Zone project, a new bright spot with many expectations of Binh Duong. Mr. Mai Hung Dung, Standing Member of Provincial Party Committee, Standing Vice Chairman of Provincial People’s Committee:  After 25 years of construction and development, Binh Duong’s economic scale has grown stronger, competitiveness has improved significantly. , creating a continuous growth momentum for many years has created the premise and basic foundation for the province to continue to innovate, integrate, industrialize, modernize, develop quickly and sustainably in the following years. . The province steadfastly aims to attract new projects selectively, prioritizing investment projects of partners with strong potential, large economic groups, high-tech industries, high added value, Less labor intensive, environmentally friendly. In which, the province focuses on attracting well-planned and developed industrial zones. Science and Technology Industrial Parks are expected to play a key role in transforming existing IPs into smart ones, step by step helping Binh Duong have a solid foundation in science, mastering and creating production tools. new technology based on science and technology, prepare to meet new challenges and opportunities in the digital era, the era of industry 4.0.