Industrial production recovers in most industries

According to the Ministry of Industry and Trade, industrial production in the first quarter of 2022 continued to prosper with the added value of the whole industry increasing by 7.07% over the same period last year. 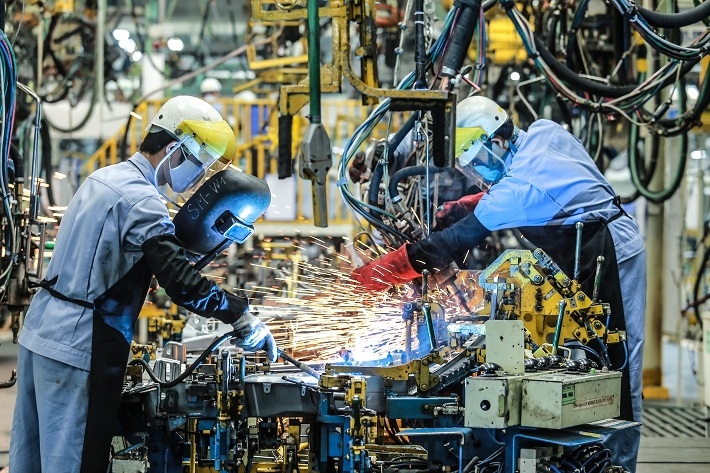 The Purchasing Managers’ Index (PMI) in February continued to increase to 54.3 points, the number of new orders increased and the stable business conditions contributed to the increase in domestic manufacturing output.

However, the Ministry of Industry and Trade also said that the production recovery process also encountered some obstacles due to the scarcity of raw materials and high prices, which inhibited the increase in production output. Along with that, workers in some industries have not completely returned to work, which has affected the restoration of production and business.

Regarding the prospect of industrial production in the coming time, the Ministry of Industry and Trade said that it will continue to prosper thanks to a number of factors. First of all, the recovery of the world economy and the implementation of Vietnam’s free trade agreements (FTAs) have been fully implemented with more preferential tariffs and commitments on facilitation. reduce barriers.

Besides, the wave of investment shift to restructure the supply chain of foreign corporations with large production scale and wide customer network.

In addition, the economic recovery package with supportive policies will help the business community, especially businesses in industries heavily affected by the Covid-19 epidemic, quickly recover production and business activities…

To promote industrial development in the coming months, the Ministry of Industry and Trade noted the need to drastically, synchronously and effectively implement Resolutions 01 and 02 and the economic recovery program, promoting disbursement of investment capital. public private sector, closely following the progress to soon put into operation key projects, playing an important role in the fields of electricity, oil and gas, processing industry, manufacturing… creating added value in Industrial production.

On that basis, it is necessary to continue promoting industrial restructuring in the direction of increasing the proportion of processing and manufacturing industries and reducing the proportion of processing and assembling for industrial products manufactured in Vietnam. Male. Review mechanisms and policies affecting industry of each industry and product. Step by step remove difficulties for enterprises to increase competitiveness, build technical barriers for imported products to support domestic products, increase localization rate.

Specifically, enterprises in the energy industry must closely monitor the supply and demand of imported crude oil and coal; evaluate to have stable, effective and optimal operating options for the plant; ensure uninterrupted fuel supply, ensure national energy security. Actively coordinate, share information, resources, markets, make maximum use of resources of each service unit; promote internal resources, enhance and prioritize the use of each other’s services to promote the development of domestic production and consumption.